Please pardon our appearance as we finish building our new website and move it to the new address of our collaborative, Christbythesea.net.

Our History and Statue

The building of Saint Anthony’s Church was begun in the year 1875. Mannuel Grassie, a mason, was in charge of construction of the cellar. Assisting him were Patrick Downs and Captain John Smith. Capt. Smith was married to Lucy Enes Frates whose mother, Ignatia Concepcion Frates, was preparing to leave the Azores for the United States in 1875. Upon learning by letter from her daughter that a new church was being built in Cohasset, Mrs. Frates delayed her journey until a statue of St. Anthony could be carved

This statue was hand carved from a solid piece of wood and cost thirteen dollars. An interesting anecdote is told to the effect that St. Anthony to whom we pray for recovery of lost articles was himself lost in coming from the Azores to Cohasset. During the journey the statue became separated from the rest of Mrs. Frates ’luggage and remained lost for a period of two weeks after her arrival here. The great concern among the parishioners over their lost was met with Mrs. Frates’ confident assurance that “St. Anthony can’t become lost.” After two weeks of petition to St. Anthony, his lost statue was finally delivered.

The Smith family lived at that time on Stockbridge Street in a house raised in 1936. The Statue was set up in a corner of the living room a basket placed before it, and all visitors to the home would place pennies in the basket to pay for the statue. When the church was finally completed in 1876, the statue was set up in the Church, the first to be placed there.

This story was told to Rev. Lawrence Crowley by Mrs. George Antoine, daughter of Capt. Smith and granddaughter of Mrs. Frates. Mrs. Antoine died in June 1938.

Holy Saint Anthony, gentlest of saints, your love for God and charity for his creatures, made you worthy, when on earth, to possess miraculous powers. Miracles waited on your word, which you were ever ready to speak for those in trouble or anxiety. Encouraged by this thought, I implore of you to obtain for me (insert your request here) the answer to my prayer may require a miracle, even so, you are the saint of Miracles. O gentle and loving St. Anthony, whose heart was ever full of human sympathy, whisper my petition into the ears of the Sweet Infant Jesus, who loved to be folded in your arms; and the gratitude of my heart will ever be yours. 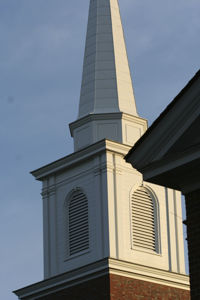 We, the parish family of St. Anthony Roman Catholic Church

welcome all, young and old, active or inactive, committed or alienated, to enrich their lives by joining and participating in our faith community. We seek to reflect the light of Jesus Christ by reaching out to serve all, and by sharing our joy and hope, as we continue our faith journey. May our lives, inspired by the Holy Spirit, and nourished by the Eucharist, bear witness to our love for neighbors near and far.

“Through Baptism each child is inserted into agatering of friends who never abandon him life or death.  ….This group of friends , this family of God, into which thye chid is now admitted, will always accompany him, even on days of suffering and in lige’s dark nights: it will give him consolation, confort and light.”